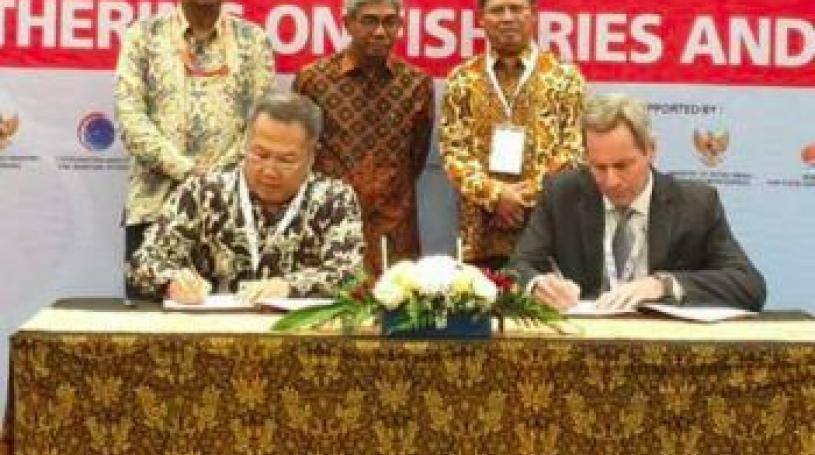 Jakarta (ANTARA) - A consortium of Indonesian firms, led by PT El Rose Brothers, entered into an integrated fish farming cooperation agreement with a Norwegian company Sterner AS at the 2019 Trade Expo Indonesia (TEI).

The signing of the agreement took place between Director of PT El Rose Brothers Ferry Budiman and Director of Sterner AS Gisle Larsen at the Nusantara Convention Hall, ICE BSD City, Tangerang, on Wednesday (Oct 16), according to a written statement issued by the Indonesian Embassy in Oslo and received here on Thursday.

The agreement paves the way for substantial investment for development of an onshore fish farming business in Indonesia based on the Recirculating Aquaculture System (RAS) technology.

RAS technology is a crucial component in the production of fish products that are low-carbon and sustainable in future. Sterner's RAS technology-based facilities will enable production based on quality assurance, traceability, and managed growth to create a zero-waste and low-carbon environment.

PT El Rose Brothers will start constructing the RAS facility in Yogyakarta Province in 2020, with a planned first-stage production capacity of 2,500 tons annually of white snapper products. The project is planned to usher in investments reaching US$50 million.

The incorporation of Norwegian RAS technology in aquaculture business is expected to sustainably produce high-quality fish products by utilizing the quality-control advantages of Sterner AS.

Furthermore, PT El Rose Brothers has planned to build a hatchery facility to support the operation of the RAS facility and improve the quality of Indonesian fishery products, in general.

"We are very pleased to be working with El Rose Brothers to start a new chapter in the production of onshore fishery products in Indonesia. This partnership project can serve as the basis for integrating Sterner's foreign investment, RAS technology, and clean water management in Indonesia," Larsen stated.

Through the integration of world-class advanced technology in the field of aquaculture, owned by Sterner, Budiman was optimistic that El Rose Brothers would become a leader in the production of high-quality and safe fishery products for consumers.

"We are indeed aiming to become a producer of fishery products with onshore facilities within the next five years that will provide products for the domestic and global markets," he revealed.

On the occasion, Indonesian Ambassador to Norway Todung Mulya Lubis, who also witnessed the inking of the agreement, encouraged all parties to provide support, so that the cooperation could be realized concretely and in accordance with the plan.

"In addition, it is necessary to ensure that the project can operate immediately by fulfilling all applicable provisions in Indonesia. Thus, this project can support improvement of the national economy and provide benefits for the community, particularly in the province of Yogyakarta and Indonesia, in general," Ambassador Todung stated.